Steve Claridge has experienced life at every level of football, from non-league Weymouth to scoring the last-minute winner in a Wembley play-off in 1996 to help Leicester City reach the promised land of the Premier League and lift the League Cup with the Foxes a year later.

Then there was his spell at Luton Town under David Pleat who he recalls played “too much passing football”. 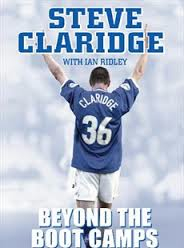 After turning out for 22 clubs and playing more than 1,000 professional games he reluctantly hung up his boots at the age of 41 in 2007.

His first book Tales from the Boot Camps, the story of his route to the Premier League, was published to critical acclaim and helped shape the witty and trenchant views on the modern game which make up its sequel Beyond the Boot Camps.

Now a respected BBC pundit for Radio 5 Live, Football Focus and The Football League Show, he will try and keep his socks up during the session.