Sophie Hannah is the internationally bestselling author of nine crime thrillers, which have been published in more than 20 countries. Two of Sophie’s novels, The Point of Rescue and The Other Half Lives, were adapted for ITV’s Case Sensitive series in 2011 and 2012 and in 2013 The Carrier won the Crime Thriller of the Year Award.

Sophie’s Poirot novel, The Monogram Murders, was written with the blessing of the Agatha Christie’s estate – the first since the legendary crime-writer’s death – and has been an international bestseller, reaching a top five position in the book charts in more than fifteen countries. It is out in paperback in time for Books in the Belfry.

The Monogram Murders was published 38 years after Agatha Christie’s last novel, Sleeping Murder came out in 1976, and 39 years after the final Poirot novel, Curtain. 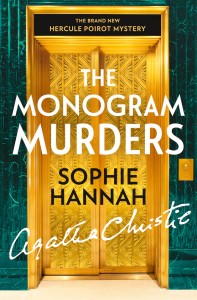 Mathew Prichard, chairman of Agatha Christie Limited and grandson of Agatha Christie, says: “Sophie’s idea for a plot line was so compelling and her passion for my grandmother’s work so strong, that we felt that the time was right for a new Christie to be written.”

Sophie’s poetry has been shortlisted for the TS Eliot Prize and is studied at GCSE, A-level and degree level across the UK.

She lives with her husband, children and dog in Cambridge, where she is a Fellow Commoner at Lucy Cavendish College.