Tony Parsons is a journalist, broadcaster and author who began his career on the New Musical Express, writing about punk rock.

He is renowned for his best-selling novels on the trials and tribulations of modern life, notably the multi-million selling Man and Boy, which won the Book of the Year prize in 2001. 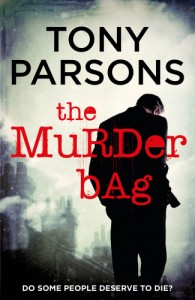 Other novels that did as he puts it “pretty well” include One For My Baby, Man and Wife, My Favourite Wife, Men from the Boys and Catching the Sun. Julia Roberts liked his novel The Family Way so much that she bought the film rights.

Now he is moving in a new direction with the publication of The Murder Bag, the first in a trilogy of crime novels.

He lives in London with his wife, daughter and their dog Stan – who has provided the model for detective Max Wolfe’s fictional hound.