On this page you can read short biographies of our (book) authors and, scrolling down, the session hosts and the performers at the gala evening.

CLARE MULLEY: The Women who flew for Hitler 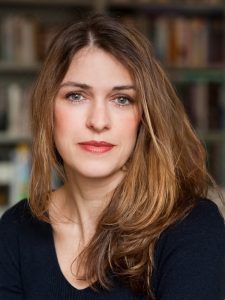 Clare Mulley is the award winning author of three biographies, the most recent being The Women who Flew for Hitler which was published in paperback this year.

It follows The Spy Who Loved, which uncovers the hidden life of Christine Granville, Britain’s first female special agent of the Second World War, which has been optioned by Universal Studios and The Woman Who Saved the Children which explores the life of Eglantyne Jebb, the controversial founder of Save the Children. Her book on Jebb won the Daily Mail Biographers’ Club prize.

A seasoned public speaker Clare has also contributed to The Arvon Book of Life Writing and compiles reviews and articles for The Spectator, History Today and The Church Times, perfect titles for the setting of St.Leonard’s. She also appears on TV and radio.

Clare is originally from Harpenden but now lives in Essex with her husband and three daughters. 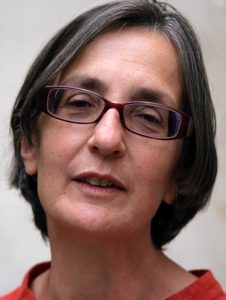 Dr Helen Pankhurst is is the great-granddaughter of Emmeline Pankhurst and grand-daughter of Sylvia Pankhurst, leaders of the British suffragette movement.

A consultant on the 2015 film Suffragette she took part in the Opening Ceremony at the London 2012 Olympics. She has carried on the family tradition as a women’s rights activist and is also a senior advisor to CARE International, working in the UK and in Ethiopia, where she lived until she was 12.

On the Sunday before International Women’s Day each year, Helen leads an annual march in London. 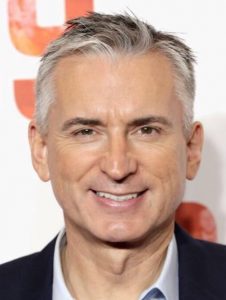 Alan Smith is best known for scoring the iconic goal in Arsenal’s title winning match at Anfield in 1989 which even inspired the best-selling novel Fever Pitch.

In his first season at Leicester, playing up front with Gary Lineker, he scored 13 goals which helped the club win promotion to the old First Division.

In his eight years at Arsenal he won two league titles, the FA Cup, the League Cup and the European CupWinners’ Cup. For four consecutive seasons he was the club’s top scorer and won the Golden Boot in 1988-9 and 1990-1. His solitary goal against Parma in the 1994 CupWinners’ Cup elevated him to hero-like status at Highbury.

Capped 13 times for England he is now a co-commentator with Sky Sports.

KATHERINE SUNDERLAND: How to Blog 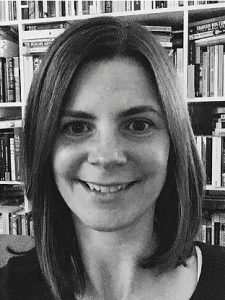 A self-confessed bibliomanic Katherine started her blog bibliomaniacuk.blogspot.co.uk in 2016 which has since been short-listed for national blogging awards. On it she shares her book reviews, guest posts, author interviews and blog tour posts.

In 2017 she launched the virtual Bibliomaniac Book Club on the blog which is a monthly post for book clubs providing questions, discussion topics and lots of other things to help kick start any book group’s reading chat.

Katherine, who lives in Harpenden, is also the Communications Manager at No Exit Press, an independent publisher of crime fiction.

SARAH VAUGHAN: Anatomy of a Scandal 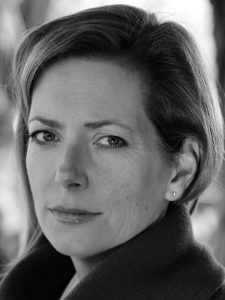 Anatomy of a Scandal is Sarah Vaughan’s third novel and has already been translated into 21 languages and made the Sunday Times bestseller list.

Before turning her hand to fiction she was a journalist, writing under the byline Sarah Hall. After journalism college and work at The Times she trained with the Press Association and spent 11 years on The Guardian as a news reporter, health correspondent and political correspondent eventually leaving after the birth of her second child.

She lives just outside Cambridge with her husband, two young children, geriatric cat and puppy. When not writing she loves to walk, run, read. 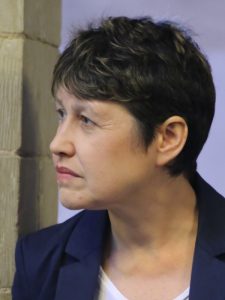 Vikki Orvice has been a journalist for 33 years, the last 27 spent on national newspapers including The Observer and The Daily Mail. In 1995 she joined The Sun as a staff football writer, the first female appointment of its kind by a tabloid in this country.

Her work – which since 2000 has included a role as the paper’s Athletics Correspondent – has taken her from the Conference to European Championships and World Cups as well as five Olympics, six World Athletics Championships, four Commonwealth Games and more than a dozen Wimbledon tennis championships.

She has appeared on numerous TV and radio shows, is a board member of Women in Football (WiF), vice-chair of the Football Writers’ Association and earlier this year was highly commended in both the Specialist of the Year for her athletics coverage and Scoop of the Year categories at the Sports Journalism Awards.

A long-suffering Sheffield United fan she blames Bramall Lane legend Tony Currie for being responsible for a life spent watching sport – and getting paid for it. Vikki has lived in Flamstead for the past 14 years. 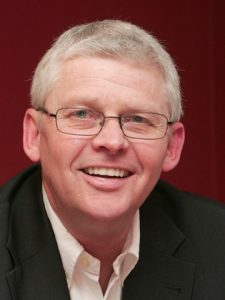 Ian Ridley is the author of 12 sports books, including the number one best-selling Addicted with former Arsenal and England captain Tony Adams, which was nominated for the William Hill Sports book of the Year, and the follow-up Sober which is out in paperback in August 2018.

Over a 40 year career he has written for The Guardian, The Daily Telegraph, The Independent on Sunday, The Observer and The Mail on Sunday, for whom he was Chief Football Writer, and is a regular pundit on both TV and radio.

He was named Sports Journalist of the Year in the 2007 British Press Awards and has been nominated on two other occasions. He also has his own publishing company Floodlit Dreams. His debut novel The Outer Circle was published to critical acclaim earlier this year.

Ian has lived in Flamstead for the past 14 years.

The Company has performed at Festivals worldwide including the Cheltenham Literary Festival, the Three Choirs Festival, the Bath Shakespeare Festival and earlier this year at the Bloxham Literature Festival in Oxfordshire.

Love, Life and Laughter is presented by a talented and well-known cast:

His theatre work has involved numerous West End and National Theatre appearances including Horace Hardwick in Top Hat; Ted Punch in Ducktastic, directed by Kenneth Branagh; Friar Francis in Much Ado About Nothing, alongside David Tennant; Bernard Woolley in Yes Prime Minister; Aeschylus in Frogs and Earl Haig in Oh What A Lovely War.

In 2014 he was a full-time member of the BBC’s Radio Repertory Company for which he recorded over 30 radio plays. He has voiced numerous factual programmes for Radio 4 and the World Service.

Clive, who lives in Flamstead, has written an adaptation of Billy Budd with the composer, Paul Knight, and penned and directed five traditional pantomimes for the Bristol Old Vic Theatre School.

Nicola has starred in West End’s Cats, Phantom of the Opera and the National Theatre production of Oklahoma! She is also in this summer’s hit sequel film Mamma Mia: Here We Go Again.

Malcolm’s credits include Radio 4‘s The Archers having played Graham Ryder for 21 years, RSC’s Shakespeare Revue and the Olivier-nominated The Madness of George III.

Michael has appeared in West End’s By Jeeves and on TV, BBC’s Pointless and Channel 4’s The Last Leg.