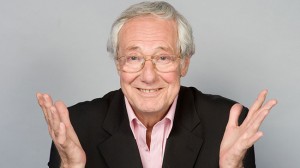 Barry Norman is one of Britain’s most popular and enduring broadcasters, best known for fronting the BBC’s flagship Film Programme for more than 25 years.

Barry started his writing career as a journalist on the Kensington News and was Show Business Editor of the Daily Mail until 1971. He has contributed to The Guardian, The Observer, and The Times and continues his work as a critic with a regular column for the Radio Times.

Barry also wrote and fronted four memorable TV series on The Hollywood Greats, one on The British Greats and the 10-part BBC series Talking Pictures, all backed up by best-selling books.

His moving memoir See You in the Morning was prompted by the death of his wife Diana – herself a former journalist and an award-winning historical novelist – in 2011. First published to critical acclaim a year ago and then in paperback this year it is a candid and witty account of his life and a heartfelt reflection on love, marriage and loss.

Barry still lives in Hertfordshire in the home he shared with Diana for many years.

He will be in conversation at Books in the Belfry with journalist Vikki Orvice talking about See You in the Morning, movies and more.