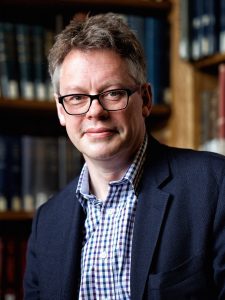 Dermot Turing – or Sir John Dermot Turing to give him his full title – is the nephew of legendary mathematician, computer scientist and code-breaker Alan Turing.

Having followed his uncle to Sherborne and King’s College, Cambridge he spent his career in the legal profession, most recently as a partner of Clifford Chance.

As a family member and also a trustee of Bletchley Park, he had access to many previously unpublished papers and photographs for his biography “Prof: Alan Turing Decoded” including Alan’s own notebook and diaries.

The book which draws on personal insights and family sources explores the impact of Alan’s codebreaking work at Bletchley Park and the tragedy of his early death in the wake of his conviction for gross indecency in 1952. Along the way Dermot presents a portrait of Alan the man – his friendships, his loyalty and his extraordinary achievements.