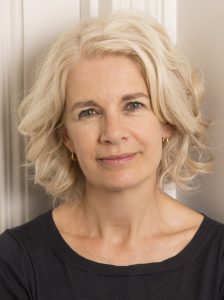 Renée Knight worked for the BBC directing arts documentaries before turning to writing.

She has had TV and film scripts commissioned by the BBC, Channel Four and Capital Films. In April 2013 she graduated from the Faber Academy “Writing a Novel” course, which is sponsored by the famous publisher and known for nurturing breakthrough talent.

Disclaimer, which catapulted into the top 10 best-selling fiction lists earlier this year, is Renée’s first novel and the film rights have already been sold to 20th Century Fox.

Likened to the domestic noir thrillers ‘Gone Girl’ and ‘Girl on a Train’ it has a brilliant central premise: Imagine you had a terrible secret that you’d never told a living soul. Then imagine casually picking up a novel and discovering that your terrible secret is the plot of the book in your hands. What would you do?

Renée is currently working on a second novel in her writing shed in the garden of the London home she shares with her husband and two children.