SYBIL RUSCOE
The Boy who Bakes 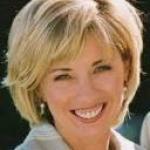 Sybil Ruscoe has been a journalist since 1978, working on national newspapers, radio and TV.

For five years she presented Ruscoe & Co, the afternoon show on BBC 5 Live, where she interviewed thousands of people from sport, entertainment and politics.

Before 5 Live, Sybil worked on Radio 1, where she and Simon Mayo won the Royal Variety Club’s Radio Personality of the Year Award. She even fronted the legendary Top of the Pops and Radio 1 Roadshows.

She was part of C4 Cricket’s RTS and BAFTA award-winning team and became the first woman to present Test TV coverage in Britain.

Sybil is now a regular presenter of BBC Radio 4’s Farming Today and On Your Farm where she has reported from ranches in South Dakota to snow drifts of north Wales.

She also runs a media training company for sports stars and has worked with the FA, British Cycling, Uk Athletics, the International Cricket Council and Dame Kelly Holmes Education.